Imagine that it was possible to save the lives of thousands of refugees by creating from scratch a new city-state. That is what Theo Deutinger offers in his experimental proposal Europe in Africa. To cope with the increasing flow of migrants reaching Europe, the Deutsch architect exposed a revolutionary idea: creating an artificial island in the Mediterranean. The island aims to welcome refugees that would have otherwise taken illegal migration paths. 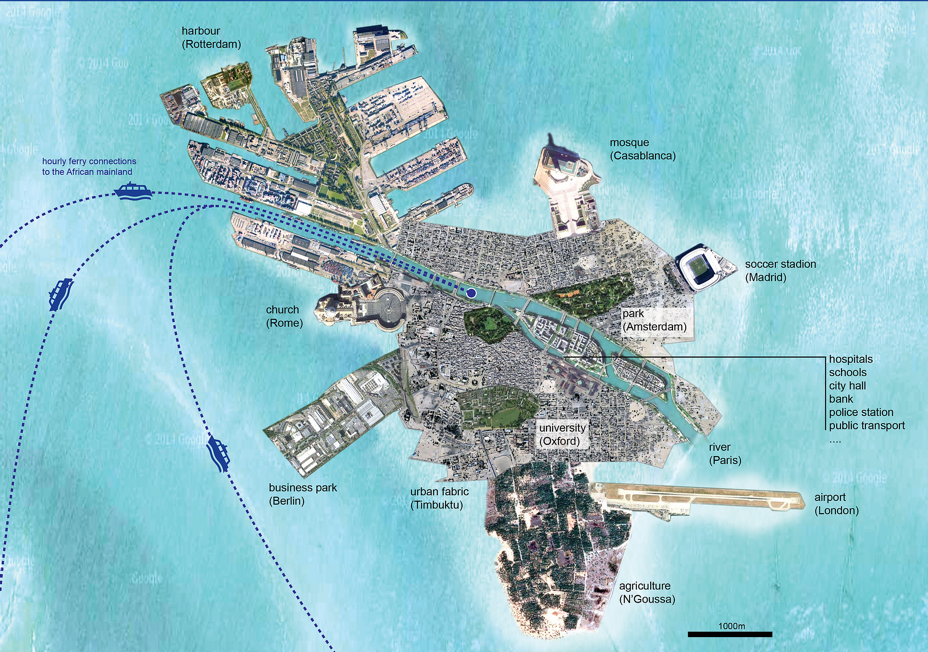 With the Europe in Africa project, “you can start to build a new life [straight away]. You can work, have your own finances and build your own future” said Theo Deutinger. It would enable refugees not to encounter never-ending legal procedures or diaspora problems as the city-state would be new and with its history and heritage to be built. But how would the EIA function?

For T. Deutinger, the European Union would take the lead at first, renting the Tunisian plateau where the island would be constructed for its first 25 years of existence. As the island would be situated between Tunisia and Italy, the idea is to establish shared governance between Europe and Africa. Or more precisely, between the European Union and Africa. When asking T. Deutinger how a co-governance between a Union with a constitution and a continent would be possible, even himself explains that “it is not completely thought through”. The project sets areas of competence for each party. EIA is “legally and politically bound to Europe” and “culturally and physically bound to Africa”.

If at the beginning EIA would be under the auspices of the European Union, the goal is to make it self-sufficient. This island can be seen as a haven for refugees. In EIA, they would be able to settle and start a new life not too far from their original culture but in a European institutional environment.

If the institutional foundations and technical functioning of the EIA could have been deepened, the project establishes key aspects of how it would work. Arriving on the island, refugees would be given an EIA passport and after 5 years of residency, they would be granted European citizenship. The EIA is suited to welcome about 150 000 refugees at first but based on its well-functioning the island would have to expand.

Creating an autonomous island implies the creation of jobs, hospitals, schools, shops, housing, a government, institutions, and so on. This would take time. In the beginning, the island “would not be that attractive” mentions T. Deutinger. But after some time, when a government is established, a constitution enforced and an economy well-functioning, the EIA would be a paradise land for migrants and refugees. It would have its own currency, banking, and tax system, its own trade agreements. Additionally, the island is sketched to be sustainable: solar panel, responsible agriculture. It presents itself as a solution to migration fitting the requirements of the XXIst century.

For T. Deutinger, “only a supra-national entity can bring forth an idea like that”. If the initiative comes from an architecture firm, institutional supervision is needed in order to know if the project is viable. For the moment the European Union did not comment on the proposal. Even without their insight, EIA ‘is forcing us to rethink our mindset about the nation-state and is propagating the need (…) for future land”.

The project faces critiques. Deutinger acknowledges it himself: “there is too much Europeanness” in the project. Due to the fact the initiative came from within Europe, it was predictable, but it is important for this project to work to have insights from African countries as well. Europeans exposing themselves as the savers of underdeveloped countries is nothing but an old habit. The real problem is that EIA is a solution that does not touch upon the roots of the refugee crisis. If an efficient and sustainable solution is to be found, there should be a focus on how to make Africa autonomous financially and enable the continent to undertake their own initiatives. The European help should be financial at the beginning but not only. It should be a backing toward self-sufficiency.

Realistic project or utopia? This practical experiment paves the way for people to rethink the approaches towards the refugee crisis. If it is not possible to make EIA a reality for the moment, it might be used as an inspiration for future generations.

To find out more about the Europe in Africa project, you can access their website by clicking on the link: https://www.europeinafrica.com